This article comes from RZIM’s Advent Devotional featuring reflections and Scripture verses specifically chosen for the season leading up to Christmas.

“And the glory of the Lord will be revealed, and all people will see it together. For the mouth of the Lord has spoken.” Isaiah 40:5

Have you ever been to a wedding where the bride-to-be ran down the aisle? I haven’t. The bride always seems to walk slowly. Of course, we are unsurprised that a bride who has been waiting for her wedding isn’t in a hurry at her wedding. Weddings aren’t about speed. If they were about efficiency, we wouldn’t have a flower girl preparing the way. A wedding is a glorious event, not a race, and that makes all the difference. A slow bridal procession isn’t a sign of hesitation; it is the buildup of anticipation saturated with joy because of the certainty of the destination.

God is a slow God. He takes his time. He isn’t in a hurry and nothing can hurry Him. He is enjoying preparing something glorious. The only downside is it leaves us waiting. 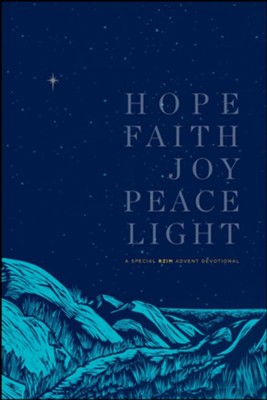 Featuring over thirty members of the RZIM speaking and writing team. This would make an ideal Christmas gift, so order it today for yourself, family, and friends!

The Israelites spent a lot of time waiting for God to rescue them from rough situations they created. At one point in their bondage, the prophet Isaiah came along with a message of a coming comfort, a payment for sin, a voice calling in the wilderness to prepare a way for the Lord to come, and of a world in disarray. He concludes, in our verse for today, “And the glory of the Lord will be revealed, and all people will see it together. For the mouth of the Lord has spoken” (Isaiah 40:5).

A promise such as this is great and glorious to be sure—but will it really happen? Perhaps you’ve overheard a squabble when some-one said, “Yeah, well, says who?” The implication is that truth can’t be based on the other person’s authority. Isaiah doesn’t rely on his own authority: “The mouth of the Lord has spoken.” That’s a pretty good reference! It is the authority of a God who has a proven track record for being able to do what He says He will do. He did rescue Israel that time.

Here is where it gets interesting. Isaiah’s words were good news to the Israelites, but the goodness of that news was deeper than they realized. Later, the New Testament authors understood that the voice calling in the wilderness came to its fullness in John the Baptist’s ministry and that he was preparing the way for the Lord himself to come and minister to his people. What Isaiah foretold was glorious for the people of Israel, but it wasn’t the end of the story. The Jews who would later follow Jesus quickly realized that the thing they thought was glorious beforehand was really just the warm-up round. When Christ walked the earth, the glory of the Lord was revealed in a grander but expected way.

The old hymn captures the anticipation and the glory of the coming of Christ:

Long lay the world in sin and error pining,

Till he appeared and the soul felt its worth.

For yonder breaks a new and glorious morn! (1)

What God promised in the Scriptures He fulfilled! The fact that his glorious coming was prophesied allows God to say, “I told you so!” And it allows us to grow in our confidence that God is faithful to do what He has promised. Scripture serves as a placeholder of promises in time, allowing us to look back and gain confidence for the future. We see a pattern: The Lord speaks, and it happens.

It would have been a grave mistake if Israel thought God revealed his full glory to them at the time of their deliverance from captivity. There was more to come. In the same way, it would be a grave mistake for us to assume the fullness of God’s glory has been revealed to us after the first coming of Christ. There is still more to come.

God is proceeding slowly through time, not in a hurry, and not with hesitation, but right on track. Future events, which develop from things started long ago, bring us joy now, because when the future is certain, joy crosses the barriers of time. Joy comes alive when we look back with gratitude to the glorious things that have happened. Joy is felt in the present when previous hopes are completed. Joy also comes from the future because the future is laden with anticipation. Joy will be the state in which we live in the fullness of time.

Those of us who know the Lord are comforted, and we wait with an anticipation saturated with joy because of the certainty of the destination. On that day, when God sifts the world, “The glory of the Lord will be revealed, and all people will see it together. For the mouth of the Lord has spoken.”

Find more thoughtful content on these topics in RZIM Answers.