Why Does God Care Who I Sleep With?

Christians are often seen as outdated, restrictive, and judgmental when it comes to sex before marriage, homosexuality, gender identity, or transgender rights. In his new book, Sam Allberry sets out God’s good design for the expression of human sexuality.

This article is an excerpt from the introduction in Sam Allberry's newest book, "Why Does God Care Who I Sleep With?" Click here to pre-order the book and continue reading about this topic.

It was probably the most bizarre moment of my life.

I was doing some English teaching in central Thailand and had been invited to contribute to a regional training day for high-school English teachers. As a “native” English speaker, I was there to help with things like pronunciation and conversational English. Or so I thought.

The first indication that this wasn’t going to go as I’d expected was when they invited me onto the stage at the start of the day. After they introduced me they said we were going to open the day by singing the song chosen as the theme for the day. Or rather, their very own native English-speaking guest was going to.

The bad news: I really can’t sing, not in front of actual people. The good news: the song was in English. The other bad news: the karaoke system they were using. It was weird enough that it was early morning on a Saturday, that I was in the middle of a very unfamiliar country, that I’d agreed to come and do this as a last-minute favour to my Thai hosts, and that I was now about to sing solo to several hundred teachers.

The song was I Just Called To Say I Love You by Stevie Wonder—admittedly a great song, but not necessarily what you’d immediately associate with teaching the language of Shakespeare. I was already well out of my comfort zone, but that wasn’t the worst of it. The background footage on the karaoke screen was rather raunchy—a procession of writhing bodies in various states of undress. Somehow I had to follow the words while ignoring the incongruous imagery they were accompanied by. And try not to turn the colour of beetroot while doing it.

All of which is to say that it is impossible to avoid the subject of sex. If it pops up in as innocuous a setting as I was in that morning in Thailand, there really is little hope of steering clear of it in any and every area of life.

And if I’m honest, short of repeating my karaoke experience from that morning, writing a book on sex is about as bizarre a thing as I can imagine myself doing right now. But, like I say, it’s impossible to avoid—because it means so much to all of us.

For the past few years I’ve been working for a charity whose main task is to address the most urgent questions people have about the Christian faith. Other books in this series will give you a feel of what some of those questions are; but top of the list for most people invariably has something to do with what Christians think and believe about sex.

It is not hard to see why. We know that our sexuality, sex, and the relationships we form are a part of life that really matters. It is not inconsequential. I am very conscious that every single one of us has a range of powerful emotions that come into play as we talk, think and react to sex and sexuality in our lives and culture. We have memories (both good and bad) that shape how we think and behave. Some of us will have painful memories and experiences that continue to haunt us. Some of us will be restless, seeking some form of deeper satisfaction than we’re currently experiencing. Some of us will be confused by various things we’ve experienced. And some of us will be perfectly happy with our sex life as it is, and perhaps wonder what all the fuss is about.

And that means that this could be a difficult book for you to read. Whether you’re a Christian or not, you may at times find yourself wanting to grunt in disgust or hurl the book across the room—because what I am suggesting conflicts so deeply with your own views and experience. But rather than give in to your instinct to hurl this book far from you, can I urge you to consider carefully, and as objectively as you can, as I try to explain why I think sex matters so much to all of us. I’m writing this as someone who is single and expects to remain so for the future. As a Christian that means I am committed to being celibate—to not having sex unless it is with someone I’m married to. This issue matters to me, just as it does to us all.

I’m writing this as someone who is single and expects to remain so for the future. As a Christian that means I am committed to being celibate...This issue matters to me, just as it does to us all.

There are significant challenges for Christians in discussions about sex. More and more, sexual freedom is regarded as one of the greatest goods in Western society. A huge amount has changed over the past decade or so. Just fifteen years ago Christians like me, who follow the teaching of the Bible, would have been thought of as old-fashioned for holding to the traditional Christian understanding of sex being exclusively for marriage. But now, increasingly, we are thought of as being dangerous to society. Our views on sex have become that significant. Who we sleep with is seen as a supreme human right. Anything that seems to constrain our choice in this area is somehow viewed as an existential threat.

So the Christian claim that sex is for a very particular context is far more of an offense than it is a curiosity. Why should God care who I sleep with? is perhaps less a question and more just a freestanding objection that doesn’t really re- quire an answer.

And yet an answer exists. Christians continue to believe what we believe about sex, and it is a belief that isn’t going away, however much it might be derided today. And it is a belief for which there are compelling reasons. I would love you to understand these reasons and weigh them properly before you decide what to do with them.

God cares who we sleep with because he cares deeply about the people who are doing the sleeping. He cares because sex was his idea, not ours.

God cares who we sleep with because he cares deeply about the people who are doing the sleeping.

He cares because misusing sex can cause profound hurt and damage. He cares because he regards us as worthy of his care. And, in fact, that care is not only seen in telling us how we should use sex, but also in how he makes forgiveness and healing available to us when we mess this up.

A quick word about the title: Yes, Why does God care about with whom I sleep? is more grammatically correct, but it’s clunky, and I really think God (and we) have bigger things to worry about. Start the book and you’ll see what I mean. 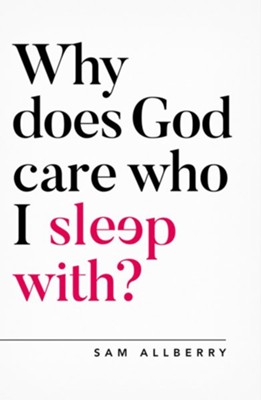 More from Sam on human sexuality

Why Does God Care Who I Sleep With?

Christians are increasingly seen as outdated, restrictive, and judgmental when it comes to sex or sexuality. In this new book, Sam sets out God’s good design for the expression of human sexuality.