Naomi leads Wellspring International, RZIM's humanitarian arm devoted to helping at-risk women and children. A dynamic and compassionate writer and speaker, she boldly addresses the most relevant topics of today.

Naomi Zacharias was graduated from Wheaton College with a BA in business/economics. After working in sales for Coca-Cola, she joined the staff of RZIM. She accepted a fulltime internship in the Office of Public Liaison at The White House and returned to RZIM to help launch Wellspring International, an initiative devoted to providing financial grants to international efforts working with at-risk women and children. Naomi has visited with women in red-light districts across Europe and Asia; foster homes for children affected by HIV/AIDS throughout Asia and Africa; displacement camps in areas of the Middle East offering aid to Iraqi refugees; areas devastated by natural disaster; and international shelters for victims of human trafficking and domestic violence.

In 2004, Naomi authored a chapter on women and education in Zealous Love: A Practical Guide to Social Justice, published by Zondervan. In Real Women, Real Faith (DVD Volumes 1 &2), Naomi is one of six speakers leading sessions on Old and New Testament female Bible characters. Her first book, The Scent of Water: Grace for Every Kind of Broken, was released by Zondervan in 2011. She has also contributed two essays included in the recently released NIV Bible for Women: Fresh Insights for Thriving in Today’s World, published by Zondervan in 2015. Her first children’s book Little Prince, Little Prince What Will You Be? will be published by Harvest House in 2021.

Perhaps kindness is bolder than we think. To anyone seeking a hero, a friend, a partner, I would suggest that kindness makes the difference between a relationship that is life-giving and one that can leave you with wounds that long for healing. 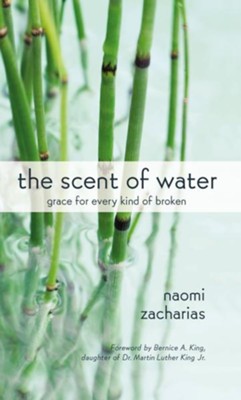 The Scent of Water: Grace for Every Kind of Broken