Director of RZIM France, Raphael speaks widely to the political, business, and academic worlds on faith and culture, as well as serving as a consultant on leadership, evangelism, and church-planting.

Raphael Anzenberger is Director of RZIM France (serving the French speaking world), an adjunct professor of intercultural studies at Columbia International University, US, and a lecturer at the Faculté Evangélique de Vaux sur Seine, France. He is also President of France Evangelisation, CEO of the Global Evangelists Forum and an ambassador at large for the board of the Conseil National des Evangeliques de France. Raphael is also co-founder of NC2P, a European think-tank on church-planting, and a trainer in mentoring for Leighton Ford Ministries, as well as being a member of the Lausanne movement’s Global Secularization Initiative working group and the Veritas Forum’s European advisory board.

He holds a bachelor and master of science in economics from the University of Strasbourg and was recipient of a Sandy Ford Scholarship in 2001 and a Billy Graham Lausanne Scholarship in 2018. Raphael also has a master of divinity in leadership, a doctor of ministry in missions, and a doctor of philosophy in intercultural studies from Columbia International University. He has written a number of books and journal articles in both English and French, including (Re)Discovering the Ministry of the Evangelist (2015), and has also contributed to the Dictionnaire de Theologie Pratique (2011).

Raphael has also worked in Chad, Africa, where he was the CFO and CEO of Bebalem Hospital for two years, and also as a part-time IT engineer at Michelin Corporation in Lexington, US, for seven years, whilst studying.

He speaks widely to the political, business, and academic worlds on faith and culture, as well as serving as a consultant on leadership, evangelism, and church-planting. Raphael lives in Nice, France, with his wife, Karen, and four children. 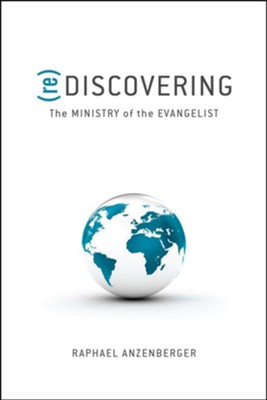 (re)Discovering the Ministry of the Evangelist