Stuart speaks all over the globe in churches, universities, and other forums with the same passion he first knew as a follower of Christ. Once imprisoned for distributing Bibles in Yugoslavia, Stuart is a bold, intelligent, and articulate speaker.

Born in Scotland, Stuart McAllister saw his life changed by Christ at the early age of twenty. Filled with a hunger to learn more and deepen his understanding of the faith led him to join Operation Mobilization in 1978. He worked with the organization for twenty years in Vienna, Austria, and his service took him to Yugoslavia, where he was imprisoned for forty days for distributing Christian literature. Upon his release, he continued to work in communist countries, resulting in more imprisonments.

With a rich history of service, Stuart has acted as General Secretary of the European Evangelical Alliance (1992-1998) and been involved with the European Lausanne Committee. He developed a mobilization movement called Love Europe, which sent several thousand team members across Europe with the message of the Christian faith. Stuart also founded the European Roundtable, bringing together a diverse group of ministries and interests that collaborated to foster “Hope for Europe.”

Stuart joined Ravi Zacharias International Ministries in 1998 as the International Director and today serves as Global Support Specialist. With a heavy travel schedule that takes him all over the globe, Stuart speaks in churches, universities, and other forums with the same passion he first knew as a follower of Christ. Stuart has been a lecturer at Alliance Theological Seminary in Nyack, New York, where he was honored with a doctor of divinity. Additionally, he has been a featured speaker several times at the European Leadership Forum.

Stuart is a frequent contributor to A Slice of Infinity, RZIM’s daily reading on issues of apologetics and philosophy, Just Thinking, the ministry’s quarterly journal, as well as Engage, a magazine published quarterly by RZIM Educational Trust. He has also contributed chapters in the books Beyond Opinion (Thomas Nelson, 2007) and Global Missiology for the 21st Century (World Evangelical Fellowship, 2000). Stuart and his son, Cameron, have cowritten a book, Faith That Lasts, which will be published in January 2021. Stuart and his wife, Mary, live in the Atlanta, GA area.

Even if we cannot discern what is at stake, God is present and working in strange places and in unseen ways. 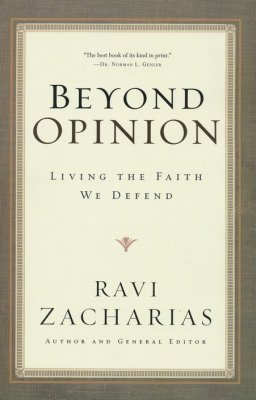 Beyond Opinion: Living the Faith We Defend

DATE CHANGE - Howard Dueck has given us the new date of March 28 - April 1, 2021. We will update new details when known and post to calendar

This is a Private Event